Are you a gorilla short of a faculty?

How to remember stuff

How to remember stuff

Zap your brain to increase your intelligence

Zap your brain to increase your intelligence 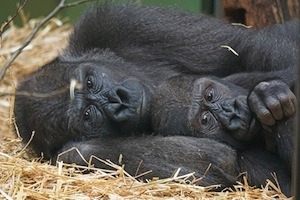 How many brain cells do think you have?

There was a time when it was believed that we have something like 100 billion neurons in our brains, but given that no one could remember how that number came about, nor from whom, Dr Suzana Herculano-Houzel in Brazil, thought she’d count!

Stuff of the old black and white, cheaply made, ‘b horror’ movies, to do so, she had to first turn the already soft, squidgy brains into a soup, before dissolving the cell membranes and counting the cell nuclei. I hope she had a system for keeping count. Just imagine losing your place half way through counting!

The number she came up with was far less than the 100 billion we’d been led to believe.

So the brains she looked at were a gorilla short of a faculty?

Even if we’ve only got around 86 billion neurons, I suspect they’re more than enough to cover our needs, especially when you consider, we develop something like 100 trillion connections, so you really can remember an almost infinite amount of information, providing you focus your attention on short bite-sized chunks, actively manipulate the information as you go, and keep it in your head by actively recalling it regularly afterwards.

While the well-known idea that we have a short-term or working memory of (7 plus or minus two) bits of information is a good starting point for us, the guy who coined the phrase ‘The Magic Number 7’, in 1954, George A Miller, didn’t take into account that we can do much better than this if we chunk information logically.

It’s based on the idea that we have a limit to the amount of information we can work with at any one time, although this will vary, depending on the sort of information it is.

This accounts for the findings that distractions while driving, for example, take some of our attention away from what we’re doing behind the wheel. Research demonstrates a four times higher risk of accident while driving and talking on a mobile ‘phone, regardless of whether it’s hands-free or not. This ‘inattention blindness’ puts us at the same risk of drink-driving!

Texting, using navigation devices, connecting with the internet or fiddling with the radio etc, etc are therefore activities that just don’t bear thinking about.

A conversation with a passenger however, is a relatively minor distraction, comparatively speaking. I guess the passenger is also watching the road and will redirect your attention or alert you to something going on ahead. They’ll even stop talking to give you space to think when necessary.

However, someone on the ‘phone isn’t in a position to do that and they therefore compete for your attention, hence the additional risk of accident.

Likewise, in an emergency, pilots are known to sometimes make errors due to being overloaded with up to 120 different bits of information, coming in the form of text alerts and checklists, flashing lights, and noisy alarms.

Almost every useful job your brain can do for you begins with attention and focus. Being able to filter out distractions and concentrate on what’s important right now is essential for learning and memorising.

And you’ve got plenty of neurons and connections for doing that with.

Mind you, all the brains she looked at were male brains!