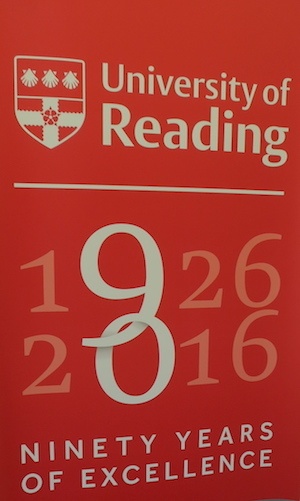 Who knows? Who cares?

Either way, I’m celebrating one particular aspect of my “happy brain” this week.

And that is its sense of humour, because this week, along with the students, teachers and fellow alumni of Reading University, I went along to join hundreds of other folk to attempt to get into the Guinness book of records as part of the celebrations of Reading’s 90th anniversary of its Royal Charter.

It was a stab at recreating the events 90 years ago, when in response to the news, overjoyed* students carried the first Vice Chancellor, W, M Childs, around the campus (apparently before he had a chance to get out of his chair!)

Strangely enough, when our turn came, no one could find the Vice Chancellor!

It was decided that, instead of picking on the gov’nor, we’d recreate the moment on a bigger scale, by an attempt on the world record for the most simultaneous Human cradle lifts.

Because this completely pointless and utterly hilarious event brings people together to celebrate academic achievement – not just over the last 90 years, and not just at Reading University, because for most of us, our time at Reading forms only a part of our academic experiences.

What’s the real reason for taking part in this event?

Every single person who takes part in an event like this has their name recorded for all time in the Guinness book of records! Fame, at last!

It was perfect weather, and as hundreds of us began to get ourselves organised, a minority of students took the opportunity to protest the recent cutbacks – PAS (Permanently Anxious Staff). Arguably, they’d have had a better chance of affecting the change they desired by making more noise two years ago. But it’s only now, I guess, they’ve begun to notice the effect of the cutbacks at the University.

Despite that, they did a pretty good job. At first marching, then settling politely in a designated protesting area.

Of course, it didn’t stop there.

They spilled into the arena set out for the main event. And the security guards just watched. (If I’d hired them, I’d be asking for my money back!) 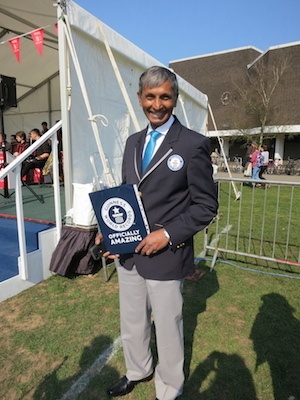 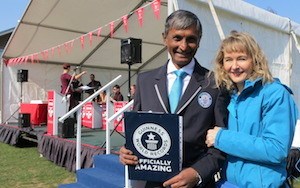 And so were they.

Another hour passed with no sign of the protesters moving away peacefully. Meanwhile, while the band played on, much fun was had by students who could dance. 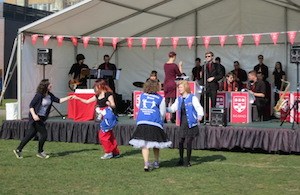 And students who couldn’t! 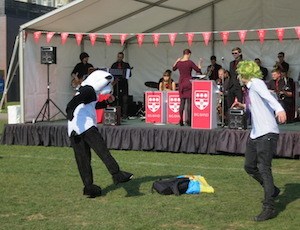 My advice? If you’re going to, dance like no one’s watching, first make sure no one is watching!

(Only kidding. You know I’d be the first to say stop worrying about what you look like, and just get on with your life.) 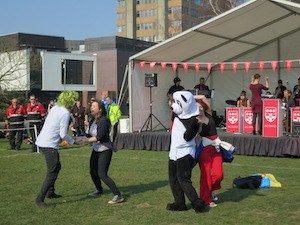 Health and safety and all that – the event was called off – and that’s that.

We’re most unlikely to try again because there’s a lot of organisation involved, setting a date, applying for a licence and paying for it.

Shame on those students. They meant well. They care passionately. But while we let them go ahead with their plans, they didn’t reciprocate.

And I think they shot themselves in the foot. Everybody was sympathetic to their message. 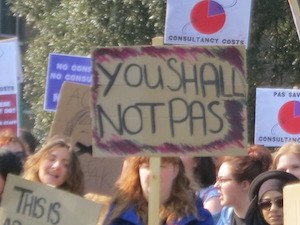 At least at first.

By turning out today, they took advantage of the media publicity – already in place for the world record attempt. And once they had achieved this aim, if they had quietly gone back to the designated area, we could have got on with our plans too. It would have meant that Reading University would have hit the headlines twice. Both for positive reasons.

But as it was, they alienated everyone else who had taken time and effort to be there to celebrate together.

Resorting to violence is never the answer, but as for me…