Ever had to rethink a strategy? 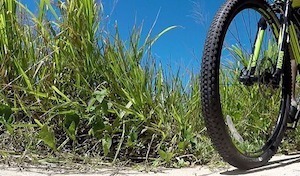 Caught with my pants down!

Go on! Bet you’d have done the same…

Making the most of the recent glorious weather and living on the river, on the day of the Summer Solstice, 2017 I cycled along the river to Reading for a routine checkup at the Royal Berks Hospital.

I’ve been working so hard recently, that have not taken the time as I have in the past, to get out on my bike. but today was different, and boy did I feel blessed!

I love my life!

Having set off a little later than originally planned, I went as fast as my little leggies would allow, and was surprised to have cycled an average speed of 9.8 mph (Half as fast again as the time it usually takes. That’s fast!). But there again, it having been such a warm dry weather for such a long time, the mud was solid under my wheels and made for a fast journey.

(The path is often so muddy and slow-going I actually carry a screwdriver in my bum bag to regularly lever out the accumulated mud, clogging up my spokes!)

Arriving by river, I entered the hospital via its nearest door, and what used to be the grand main entrance on the London Road. Astonishingly, because the hospital is so big and I needed to be at the far end, it took me nearly 15 minutes to get there by foot!

Anyway, to cut a long story short, on the hottest day since 1976 (when I and many others were supposed to be revising for O Levels, but were instead occupying our time off school sunbathing, eating strawberries and ice cream and watching Wimbledon), I cycled home again. 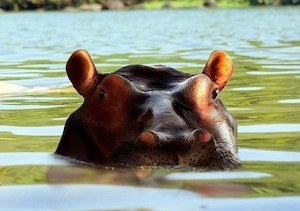 And when I got home I knew that what I really wanted was a dunk in the river, so I whipped off my cycle gear, soggy with sweat (yeuck!) and slipped into the water in our boathouse.

But this is where the story gets more exciting!

Having done something similar in the past and then struggled to get back out of the water, this time I had the presence of mind to take to the water’s edge (and yes, this is beginning to sound like Gerard Hoffnung epic):

I decided to hang on

You may remember my story about sheep-shifting, somehow managing to get a drowning sheep out of the river before she met the same fate as the other sheep lying motionless in the water.

In which case you may remember my saying that several feet of silt made it particularly difficult to help her out.

And now I’m in the river… Same problem!

It turns out that getting in was the easy part, and getting out was proving a little more difficult than anticipated! 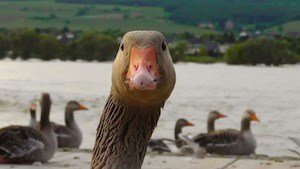 I quickly dismissed the vision that kept coming into my head of my staying in the river until Nige came home with the electrician, due to arrive several hours later to pull me out, and tried to think straight about what other options I had.

Now I’m really appreciating the fact that my mobile ‘phone is within reach. One of my neighbours is bound to be available and able to hoik me out?

But there’s one thing that I haven’t spelled out in the telling of this tale… I’m stuck, in the boathouse, naked! I did mention, didn’t I, that I took my sweaty clothes off and jumped in the water?

So now, the best thing I can hope for is to catch one of my neighbours on the ‘phone and have them pull me, starkers, out of the drink!

And that’s if I’m lucky!

I hope you are enjoying this saga. I’m giggling away as I’m remembering it. But there’s more…

Time to rethink your strategy?

Last weekend was a fun packed non-stop party, with houseguests and visitors too. The weather was perfect all weekend and after we had been sculling on Sunday morning, another friend canoed down to us to join us all for bacon sammos.

Because he had somehow managed to fall out of his canoe as he tried to come on land; and because Nige had put an outdoor chair for him to sit on while he dried himself; and later in the week because that chair was still in the same position and I had tidied it away under the stairs beside our boathouse…  there was now, one more thing I could try to save the day.

Because remember, I’m still there, wondering how long I’m going to be stuck in the river.

Miraculously, the chair is also within arm’s reach. Somehow I managed to pull it in with me, without scraping and damaging the boats. I let it sink to the wet dock floor and then stood on the seat. 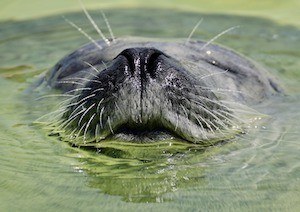 To my dismay, it gave no resistance whatsoever, and instead its legs sunk effortlessly into the silt. I was still no better off. So I tried standing on the back of the upright part of the chair. And it continued to bury itself below me.

So now I’ve got both arms almost vertically above me, one on the top edge of the wet dock and the other on the top of our boat, which of course kept sliding across the water, away from me, on its loose mooring…

But it did give me a couple of extra inches which was enough leverage for me to use all the strength I could muster to push myself up and out, naked, sprawling on the patio!

Hoorah! I’m out! And maybe I’ll cover myself up before any boats pass by to witness the game I was playing, of Solo-Twister!

Getting the chair out of the wet dock was another trial! It involved leaning precariously over the edge (earnestly hoping not to fall back in again!) and a long-handled shoehorn (thank you Bill!) hooked into the hand-hole at the top of the chair back.

Who says ingenuity is dead!

So when I’m recounting this to Nige later in the day, he says, “Why don’t you put the ladder down the side of the boathouse so you can climb back out?”

Well, you know what?

Don’t do what I do and find yourself up the creek without a paddle! Do this instead.

Some strategies for success

Ever had to rethink a strategy?

Positive psychology? Are you sure?

Positive psychology? Are you sure?