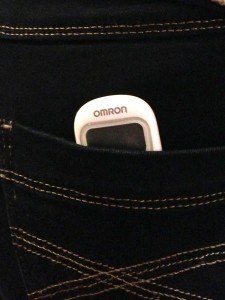 Streuth! That was quick!

Er… so no excuse not to get on with it then! Better put my money where my mouth is!

That’s the trouble with telling other people what you’re going to do… they’ll know whether you did it or not!

And I told you I was going to get a step meter and start counting my steps!

The pedometer was a doddle to set up. I told it my height and weight and also stride length. Got Nige onto the task. Take 10 strides, measure the distance, divide the length by 10. Repeat several times, take an average…

And we just had time to do that before we took with with us to our dancing lesson. Not exactly what it’s designed for! It also made a nonsense of the careful measuring we did of my stride length. However, I thought it would be fun, and so my first outing with the pedometer was waltzing, quick stepping and rumba-ing! 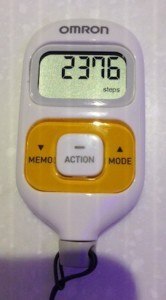 The somewhat hilarious results are as follows…

OK, so I can believe that.

After all, you can’t spend an hour hopping from foot to foot (don’t tell Neil, our instructor, that’s how I describe it!) without building up quite a step count.

But I was rather surprised by the amount of ground we’d covered, until I stopped and thought about it for a moment.

Continuous movement for an hour…

How far do you suppose we travelled? 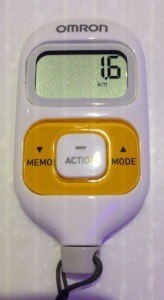 Crikey! No wonder I feel as though I’ve done some work!

But who would have guessed that the result of stretching and moving and concentrating is the equivalent (more or less –  remember it is calibrated to my stride, not my foxtrot!) of 1.6 km?

I guess it comes as more of a surprise, because we’re having so much fun. Putting in the effort is no effort!

That’s got to be the key to getting more exercise, hasn’t it?

Anything less than having fun, and you won’t stick with it. 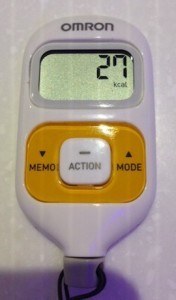 But it was the other measurements, that made me laugh…

After all that effort – 1.6 kms and some not inconsiderable effort, according to the step metre, resulted in only…

I find that very difficult to believe. Surely I would have burned 27 cal in an hour, sitting watching TV? Your brain uses 25% of calories, hence my suggestion we think ourselves thin! Ha ha!

I have to remember that the pedometer is not designed for anything other than walking. Also it’s not exactly the most sophisticated piece of kit in the first place! For that, you’d need to spend hundreds of pounds, and probably wire yourself up to a heart monitor too. 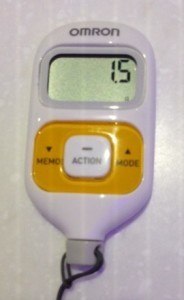 Not really what I have in mind! Well, not at this stage anyway!

That leaves one more measurement.

I refer you to my earlier exclamation! Whaaat?

Is that all? That’s the equivalent of this tiny knob of butter on a teaspoon.

So now I need to get a grip on myself and remind myself why I’ve got this little machine. It’s because I know, that typical of Human beings, when I start measuring, I start doing more of what I’m measuring, becoming fascinated by the difference I can make to the numbers.

I’m already wondering what I need to do to get up to the recommended 10,000 steps a day, to keep me fit and healthy, especially through the winter months when the cycle paths become unusable.

And even though, apparently, according to my little machine, I burned very few extra calories and fat (and, lets face it, who wouldn’t be interested in losing a little weight?) I’m actually more interested in my overall physical and emotional health.

Dancing definitely does it for me. It’s a great example of choosing the sort of exercise that has you moving more – almost by accident, because what you’re focusing on is having fun and enjoying yourself.

What do you do to move more?

Rebounding – the Perfect Exercise for your brain?

How to become 15% smarter

How to become 15% smarter