Our Grand Designs: The Trouble With Neighbours 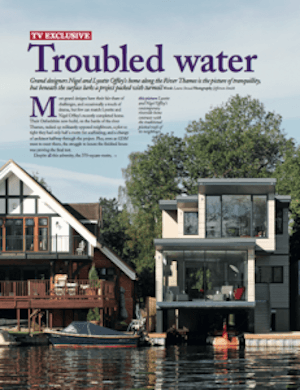 Many of you are aware that we built a new house and that it was covered by Channel 4’s Grand Designs programme. And therefore many of you will know of the difficulties we overcame – not least of which were the… ahem… complications with the neighbours. (If ever there was a euphemism for ‘trouble’ that description was it!)

Well, one morning shortly after finishing the build, I actually got to meet one of them – the one who wrote remarks underneath a video about learning skills I’d put up on my YouTube Channel.

Judging by the language, tone and content, I was convinced that the comments had been written by a young person, not an adult! But he’d written his name, so this particular morning, since I had the opportunity, I said hello.

He said he didn’t want to talk to me. He criticised me personally – my character, my actions, what I’d said on TV about the neighbours. Of course, he didn’t know me – we’d never met before. I guess his assessment of me was based on what he’s been told by a certain other neighbour, who we also barely knew – and who repeatedly refused to talk to us each time we offered them the chance to help us decide how to build, in order to minimise the impact on them.

I defy him or anyone else to find me aggressive, derogatory or disrespectful to anyone – and goodness knows we were stretched to the limit of our tethers at times!!

Admittedly, it’s common to come away from a reality TV programme feeling you’ve been somewhat manipulated and heavily edited! And when you have a dry sense of humour you simply have to accept that it can easily mistaken for arrogance by people who don’t know you.

For example, the crew, Kevin and we had been talking about the various house designs along our stretch of the river. Kevin was joking about the ‘Tudorbethan’ pastiche houses round about and I was saying how much I’d love the chance to create a whole row of modern design-led houses, as he had near Bicester.

I’d also just recently discovered that ANYONE can apply for planning permission on ANY property! It doesn’t have to be yours!

To me that sounds extraordinary and I was picturing waking up one morning to a notification that Joe Blogs had obtained permission to knock MY house down and build something in its place!!

We were laughing about that when I made some throw-away facetious comment about knocking the neighbours houses down.

Maybe I wouldn’t have if I’d realised that THAT was the bit that was going to appear on TV, in a story whose angle, right from the get-go was about neighbourly antagonism.

Certain neighbours (ones who don’t even live on the river, mind you, and don’t even need to look at our house) wanted something more traditional. Pastiche isn’t traditional, but hey!

On one occasion, one of them moaned to my husband, “Why, oh why can’t you just have a pointy roof?” We rather suspected he was sick and tired of hearing the agro day in day out at home, from his wife, whose taste in houses clearly differs from ours. And why shouldn’t it? Each to his own, surely?

I digress! Back to our chap…

Actually, it turned out, it wasn’t the programme he was influenced by. Instead, it was just one individual, pressing their opinion on anyone who’d listen. It was a “You’re either with me or against me” approach and how many of us wouldn’t be intimidated by that?

Anyway, our guy was acting from fear and from beliefs generated by misinformation and downright lies. We’ve even heard some of them.

We’ve heard we’ve sold the house because we can’t afford it…  (Nope! We moved in to the finished house in September 2012. We’re still here!)

But here’s the best one…

I left my current husband, sold the new house and went back to live with my first husband (you know – our architect, the one who abandoned the project half way through, leaving us in serious poo!)

Let me categorically state that I have not returned, nor will I be returning to my first husband!

No mention in the programme that the breakup of my first marriage was utterly heart-breaking and dream-shattering. No! We glossed over that and instead allowing the viewers to speculate an entirely inaccurate impression therefore of who was who and what was what! And I can only imagine that I don’t come out well from that!

That’s TV for you, I guess!

So why did we do it? Why did we have Grand Designs cover our build?

Simply to support our architect. My first husband. Too bad it didn’t work out as planned. If we had our time all over again, would we allow Grand Designs to be involved?

I’ll leave you to guess that one!

Some people have told me that it’s madness to have anything to do with The Ex Husband. But I figure, if you don’t eventually pick yourself up and move on, you’re only setting yourself up for more pain. It is what it is. The question is, what are you going to do next? It’s a matter of survival, isn’t it?

Meanwhile, thanks to social media, I now know apparently no one likes me, no one wants to talk to me and no one wants us on our road!

Putting aside the surprise that so many people love our house, we were only ever talking taste.

No surprise that we designed a house that we wanted to live in. Just like everyone else does. We’re not big fans of some of the houses round here, but are we going to bully and intimidate those people who live in them?

What’s more, the hard time we had has made the path much easier for those following in our footsteps and there are many lovely modern architectural houses on the river now. What a difference a day makes!!

But, the nasty, nasty, personal, vitriolic messages we’ve received on social media illustrate how easy it is to fall into the trap of believing everything you see and hear on TV. And there’s always a new flurry of them with each repeat. Channel 4, More 4, Netflix – we’re on all the time!

Don’t get me wrong! For every crappy post there are 20 or 30 supportive messages. A LOT of people love our house!

We’ve made a lot of really good friends through being introduced to other local new-build people, but thanks to social media and appearing on Grand Designs, people from all over the world also contact us to ask what window frames or floor tiles or cladding we used and we’re always very happy to let them know where they can find them for their own house build. It’s great to keep in contact with them and to encourage them along.

See? The whole social media thing has its pluses too!

But, the negative stuff!

It demonstrates how easy it is these days to communicate your opinion. And once you’ve posted – it’s too late to back track when you realise that you’re intimidating and bullying a real Human being.

You know, one day, years ago, I joined in the conversation on Twitter. And I promise you, with the exception of just two people, everyone changed their tune, once they realised I was there.

You wouldn’t talk like that to someone face to face… at least, I hope you wouldn’t… but somehow, people on social media and “people off the telly” aren’t real and don’t have feelings?

Back to my story and the chap. Of course his reaction said more about him than it did me. He didn’t even know me! And maybe his behaviour towards me was indeed more consistent with some of the stories we’d heard about him!! Ha ha – what it is to live in a small village!

Anyway – the point of mentioning this to you?

I didn’t feel heard nor understood. I thought he was wrong about me and above all else it felt unfair. Most of all, I didn’t think I achieved what I intended – to become a real person to him – so that he thought twice about spreading rumours. So I felt thwarted too.

I was in shock, but at least I knew not to take it personally, even though he was using language that suggested I should!

His accusations didn’t belong to me. I was simply standing in a road with a misinformed and frightened person. And within moments, I was cheerful again, and looking forward to the meeting I was going to.

I wouldn’t be intimidated though. I continued to say hello to him and everyone else too. I wasn’t going to be sucked in to his world. The neighbours? Most are lovely! The ones we know are anyway.

It feels good to be able to let something go that was potentially upsetting and could ruin the whole day if I let it.

And the more I practice what I preach in my Mindset Programmes, the easier my life is.

And time goes on…

Eventually, the guy in this story began to realise that he’d been rather hasty to make judgment after all. He apologised! Nowadays, he always makes a point of waving and saying hello whenever the opportunity arises!

And you know the best bit? Because, the very people who were the most obstructive to our build, came a cropper when their house flooded shortly after we’d moved in to ours, like the rest of us in our road, they also applied for planning permission to knock down their old house and build a new one.

We went online and supported their application!

Their assessment of the bad old days?

“We were rather harsh with the Offleys!”

What does watching a reality show say about you?

This week’s news is so ‘last week’!

This week’s news is so ‘last week’!