What makes you stronger when you break it?

Keep tabs on your progress and you’ll remember more

Keep tabs on your progress and you’ll remember more

Think your way to better grades

Think your way to better grades

How to get rid of anxiety, especially if you’re anxious to do so!

How to get rid of anxiety, especially if you’re anxious to do so! 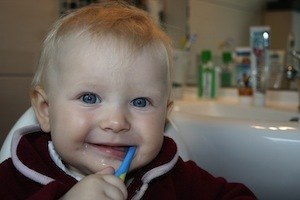 Ever wondered why, despite your best efforts, you just can’t rid yourself of the habits you want to change?

What are habits? They’re behaviours that you’ve repeated so many times that they happen automatically, without your conscious effort. You might realise half way through or after the behaviour has taken place that you’ve done it again!

We call it a trance when you do stuff without thinking. Some are useful and healthy and some are less helpful or downright dangerous.

Do you have to concentrate on how you clean your teeth or does it get done the same way each time? How about vacuuming? Do you have to think carefully how to do it, or do you move around in an absent-minded trance, and somehow the job gets done? 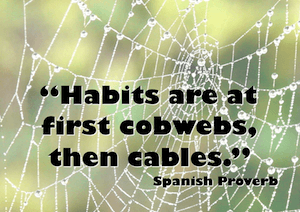 Brain cells that fire together wire together. The more you ‘practise’ an action, whether it’s deliberately executing a hill-start in the car or whether it’s reacting to a repeated trigger (the kids not tidying their bedrooms for example), the more likely it is that you will automatically ‘go there’ again the next time.

When people ask about Cognitive Hypnotherapy, I tell them that, far from ‘putting them in a trance’ my job is to wake them up from the trance that’s supporting the habit they want to change.

So why is it so difficult to change a habit on your own then?

It’s because, physiologically, we’re still pretty much the same as we were 10 000 years ago when we lived in caves! Our DNA has changed very little during this time. Our brains are the brains of cave-dwellers!

Let me clarify that!

Certain aspects of our brains have indeed continued to develop.

But each of us has within our brains, an inner-caveman! Let’s call him or her Ugga. Hell! Why not! And Ugga is on the lookout for instant feel-good fixes, especially as an antidote to stress.

Nicotine, alcohol, caffeine are a good start. Sitting around, doing nothing and avoiding effort all help too!

Ugga is so needy that he/she usually manages to override any attempt to move out of that comfort-zone.

Something else to bear in mind is how extraordinarily ineffective will-power usually is. It’s as though you have a finite amount of the stuff – the more you use, the less you have. Soon you simply run out!

So what are we to do?

For starters, you can make it far easier to do the new thing than the old thing you’re trying to change, by changing your environment. For example, get rid of the junk food and fill your fridge with healthy snacks, so that when you’re hungry and reach out for the first thing that will fill the gap – it turns out to be something you won’t regret later.

And instead of trying to make big changes by taking the ‘massive action’ associated with the likes of self-help guru, Anthony Robbins, how about working with your caveman? Because, let’s face it, making big changes is uncomfortable, difficult and stressful, and before long, Ugga will refuse to budge.

And we know it too, don’t we? How many of us have made New Year’s promises? Big ones. And failed to keep them? For the most part, they don’t work. It’s too much like hard work. 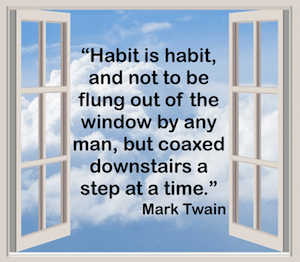 Instead of making big promises to yourself, tiny, incremental changes, that are so easy that they’re a no-brainer, is recommended these days, following neuroscience’s better understanding of how we work best.

Ugga will barely notice, and certainly won’t bother to put up a fight. Baby steps are the order of the day.

And if you want some help to install those changes, automatically, I have some great news about Cognitive Hypnotherapy.

Following years of properly executed and documented clinical trials, the paper submitted to the Mental Health Review Journal has been recommended for publication.

This means that we’re legally entitled to claim that it may work – the first time that hypnotherapy has shown to be effective for anxiety and depression.

And, as Pollyanna would say, you can be glad about that!

How to get rid of depression