Which are you – a doodle or a doodler?

One description isn’t flattering: A ‘doodle’, as in Yankee doodle, is a simpleton, a swindler or corrupt politician. (Is that a tautology? Discuss.)

And the other: Someone who knows how to maximise their mental resources to absorb and retain information.

Many years ago a trainee policeman, called Eddie, asked me if I could help him with his police exams. He’d already taken and failed them twice. He’d been told that that was his lot; he had had his chance and policing was not for him.

Fortunately for us, he disagreed.

Because he is exactly the sort of person that you would want ‘on the beat’, keeping us safe in the community. He has those emotional intelligence and communication skills necessary to defuse emotionally escalating situations – to stop trouble in its tracks.

But unless he passed these exams, we would never find out.

It turned out, as it often does, that he simply hadn’t yet discovered the best studying strategy to suit the particular way his brain prefers to process information.

He had been onto something but had been thwarted by his tutors, telling him not to ‘deface his notes’. (Doodling, to you and I.)

You see, he was already doing some of the things that he needed to do in order to get the information into his head and to keep it there. But his tutors didn’t know this and instead stopped him doing the one thing that was helping. 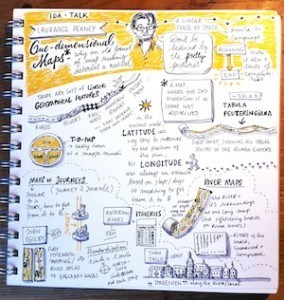 What a shame they didn’t know that to learn, we need to take information, from however it is presented (books, video, MP3, lecturer, filed-trip etc etc) and deliberately manipulate it into a form that makes sense to us and to attach to our framework of understanding that’s already in our heads.

And what a shame they didn’t know that doodling is a great way for some people to do that, and in doing so, as with other note-taking methods, making choices about what’s important and therefore encode the information in a new way in their brain.

Doodling, or to put it another way, creating a visual representation of the information you want to learn, allows two complementary processes to work beautifully together in your brain.

However because one lot of information (auditory) is coming in and the other (visual) going out (onto the page), you are engaging more of your brain in those two jobs, and those two parts work synergistically.

It also encourages you to listen differently – better – with more attention. People who are encouraged to doodle, find that as they transpose that auditory learning into images they are able to recall much more of what they heard, minutes, hours days and indeed weeks later.

A lot of the advice and training I give people, includes turning information into highly visual study notes because our brains are so well geared to making sense of images. I’m all for speeding up the studying process, making it more efficient and fun. No matter how visual you consider yourself to be (or not), the more you practice using your visual skills, the faster and better your revision will be.

Back to doodling then… Another useful technique for consolidating your learning, is to discuss your doodled notes with a fellow student, elaborating and filling in the gaps as you speak.

William Klemm, of Texas A&M University, tells us it’s a way of getting your working memory to carry more information, and suggests thinking in images, stringing them together into story chains. Sketching those story chains makes them visible and tangible.

Traditionally, doodling has been seen as absent-minded time-wasting, As criminal a behaviour as gazing out of the classroom window! (More about that strategy another time! BTW You might like to read a previous post about the health benefits of daydreaming.)

There is a great TED talk on the subject by Sunni Brown, explaining how drawing plays a central role in learning.

You’ve often heard me say that as Human beings we have a lot in common. And much of what is useful to one person will be useful to another when it comes to learning and retaining information. However, as we all know, there are also differences between us and for some people doodling is just the ticket.

Back to our courageous and determined trainee policeman. After discovering his best Genius Material learning strategy and developing some confidence around his newfound ability to absorb and retain information, somehow Eddie managed to persuade the powers that be to allow him one final go at that police exam.

Despite the fact that he was the only one sitting the exam, that the invigilator turned up late and insisted on cutting the exam time short because he had another engagement, our policemen passed his exam on this third attempt with a healthy pass mark of 78%.

So if you consider yourself an educator, and observe a pupil, apparently doing, ahem… ‘nothing’, then, in the words of those erstwhile social reformers, Pink Floyd, I have a message for you…