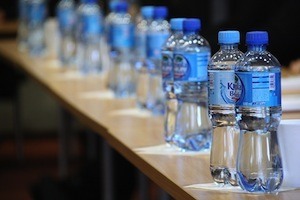 When you’re putting a lot of effort into revising and want to do yourself justice in the exams, surely it makes sense to drink enough water, now that we know that sufficient hydration gives us a better memory and mental processing?

Some research done by the Institute of Psychiatry in London and also the MRC Cognition and Brain Sciences unit in Cambridge have demonstrated that the brains of teenagers work less efficiently when they get dehydrated. A less efficient brain means that they find it far more difficult to solve problems.

So, how do we get dehydrated? We lose water all the time, through urination, sweat and even as vapour when we breathe. All sorts of things have us lose water from our bodies at a faster rate – a hot and poorly ventilated room for example.

Brain scans showed that these teenagers’ brains had to work harder to carry out the same tasks when they had lost just 1.1% of their body weight through dehydration. They were still able to do the work asked of them but fMRI scans showed increased neural effort in areas of the brain such as the middle frontal gyrus and also part of the inferior parietal lobe, both of which are involved in learning and solving problems.

The more dehydrated they became, the more they struggled with tasks they would ordinarily have performed relatively easily. It is reckoned that 1% brain dehydration equates to 10% deterioration in brain function.

We know from previous studies, that adult brains shrink in volume in response to dehydration, and by the time the brain is affected, the rest of the body has already been suffering, creating symptoms such as tiredness, irritability clumsiness, confusion, headaches and in some cases depression.

Brain cells, just like the other cells of the body need not too much and not too little water to function well and help us with a better memory in the exams. Too much water, and the cell membrane ruptures; too little, and the cell withers by as much as 10 to 15%, ultimately changing its structure, and leading to deterioration.

According to medical research, the liver and brain are the least tolerant of dehydration, leading some researchers to suggest that Alzheimer’s may be nothing more than the result of long-term dehydration of the brain. It’s true that older people show exaggerated effects of dehydration in slowed processing speeds, poorer attention and memory.

Coincidentally, there seems to be a link between urge-incontinence and a decrease in cognitive function associated with brain dehydration – a good reason, if ever I’ve heard one, to make drinking more water a good habit to adopt straight away.

The critical level appears to be 2% because beyond this level of dehydration, short-term and long-term memory, reaction times and coordination decrease substantially. In addition, dehydration increases levels of stress hormones such as cortisol, and is associated with a decrease in brain function, particularly learning and short-term memory.

Even though we are often advised to drink between 1 to 2 L of water every day, depending on our body size, most people drink 0.2L – less than one glass of water a day.

By weight, our bodies are made of 60% water. Our blood, heart, lungs and kidneys are all made of more than 80% water. Even on a fairly non-eventful, inactive day, you would lose about 1.5 L of water through urine and sweat.

Schools participating in the, “Food in Schools – Water Provision Pilot Project” reported that banning fizzy drinks and encouraging water consumption resulted in greater levels of concentration and less tiredness, irritability and distraction in their pupils.

What’s more, there was no loss of long-term memory retrieval reported, unlike the test group, who became more fuzzy-brained the more dehydrated they were.

Whichever way you look at it, we should make more effort to drink enough water and look after our brains if we want a better memory and better brain health.

Do you believe in The Magical Number Seven?

How do you measure up?

How do you measure up?

To be or not to be? The Language of Motivation

To be or not to be? The Language of Motivation