Rosemary for a better memory

Rosemary for a better memory 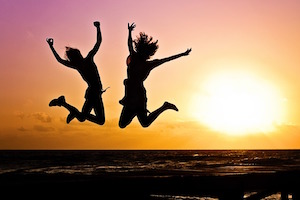 Those of us of ‘a certain age’ might recall seeing ‘Pollyanna’ on TV many moons ago. Based on the bestselling novel by Eleanor H Porter, Pollyanna is now considered a classic children’s book, and the name, synonymous with having an optimistic outlook.

We’ll come back to Pollyanna later, because I want to talk about focus and attention.

Concentrating seems to be getting more and more difficult these days, when we’re constantly bombarded with so many distractions. The Internet is often blamed for much of the problem. Maybe with good reason!

You know the joke…

“It’s not that I have ADD, it’s just that ooh look there’s a squirrel!”

Maybe not a squirrel, but another email? We know what it’s like to feel swamped with stuff coming in faster we can deal with it, all the while not getting round to that important task we were determined to tackle today.

There are many reasons for changing how we deal with day-to-day challenges. But in my book, the best one is, we would simply be happier if we didn’t try to multitask.

How do I know?

Well, I guess because information overload is such a massive and growing problem for many of us, Powers That Be have awarded research grants to scientists determined to see what’s going on. And, as if we didn’t know, the conclusion is that it’s becoming harder and harder to focus than it was in the past.

Emails, Facebook, TV, your ‘phone… are all constantly demanding our attention. The more you try to keep your eye on all of it, the more your brain begins to lose the ability to actually focus on any of it.

It means that even when people believe otherwise, it actually becomes more and more difficult to concentrate when you need to – for example, at work, or when revising for exams. Focus is a skill which we need to practice to get better at, and if you think you can simply just decide to concentrate, you’ll probably find yourself unable to after all.

So, what to do about it?

Don’t allow your thoughts, concerns, ‘to-dos’ the space in your head to tangle you up. Get them out into a list, because while you got all that going on it actually makes you stupid!

The problem is ‘attention residue’. That’s to say, your brain really can only cope with so much any one time, and while it’s busy wrestling with the noise in your head, there’s not a lot of space left for the task you’re meant to be doing. 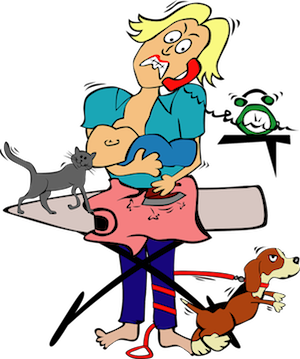 There really is no such thing as multitasking

Neuroscience tells us that the people who appear to multitask successfully are simply quicker at switching from one task to another. And what about the rest of us?

Well, our brains are slower to catch up each time we turn our attention to something new. Flipping about wastes a lot of time, and takes up a lot of brain energy. No wonder we’re tired so much of the time!

When there’s something important you have to do, and maybe you’re afraid you’ll forget, your brain keeps rehearsing it until you get it done. It’s meant to be a useful feature, but drives you nuts when you’ve got so many ‘to-dos’ that none of them get done.

Fortunately, writing them down tells your brain to stop fixating on them, and move on to something else instead.

But don’t leave it there. Jot down a plan of how and when you will get those jobs done. Somehow, that commitment to making them happen, allows your brain to relax and let go.

Don’t rely on your willpower. You might think it’s strong enough, but ask any ex-smoker if at least to start with, staying away from the people and environments where they used to smoke helped them break the habit. After all, you wouldn’t throw an alcoholic into a bar and expect them not to drink, would you?

Conversely, you want to use a ‘location-anchor’ for concentrating, so that your brain knows it’s now in the place where it settles down and gets on with it. Rather than trying to focus while you’ve got kids running around, the TV on, the dinner to cook and the ‘phone to answer, instead, regularly go to the same place (if possible); somewhere quiet, calm and organised. Each time you do, and you spend your time there knuckling down, your brain learns ‘this is the place where I focus’. 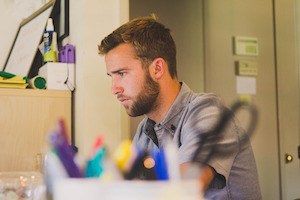 It makes concentrating a lot easier each time you do.

It’s the same principle behind using the bedroom only for sleep and sex. When you also watch TV, read emails, use the computer… your brain doesn’t know what you want it to do, and insomnia creeps in.

Where do habits come from?

Habits develop as you learn associations between an action, the context and the outcome. So use the location (context) to begin the action (focus) so you get the outcome you’re looking for (productivity).

You could of course go one step further and create different workspaces for the different sorts of work you need to do. Same principle applies.

I know of some authors who regularly barricade themselves in a hotel room for several weeks, and don’t come out from until they are done writing.

They’ve taken themselves away from all the usual day-to-day distractions, and anchored their activity to a specific location conducive to achieving the desired outcome.

Equal and opposite reaction?

Stop reacting to every little thing as and when it occurs.

TURN YOUR PHONE OFF!

Need I say any more? J 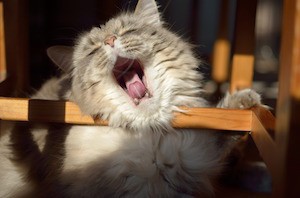 Lack of sleep turns you into a psychopath!

For some people, emotions are so shot after a night’s crappy sleep that they display similar attributes to a psychopath!

But let’s not go there for the moment! Suffice to say that we not at our best when we’ve not had enough shuteye. You know it. I know it. Now science can tell us that among the serious health hazards associated with not enough or not good enough sleep, we become much more stupid.

For students, it can make a difference between performing in the top 10%, and the bottom 10% of their cohort.

Some studies have gone as far as to say that lack of sleep makes us drive the car as dangerously as someone drunk-driving.

All in all, insufficient sleep means that you’re not able to focus your attention on what you need to.

And so we return to Pollyanna. You remember, she used to play, ‘The Glad Game’. Science has shown that focusing on what you’re glad about, or grateful for very quickly makes you feel better. An ‘attitude of gratitude’ works more reliably, and more thoroughly than any commonly prescribed drugs for depression, and doesn’t leave you with unpleasant or dangerous side-effects either.

So if you’re sick of trying to juggle everything and would like to exercise your focus muscle, you could do worse than to practice focusing on what you’re grateful for. It’s a good start.

And we can be glad about that!