Ideacide -v- courage – what’s that about? 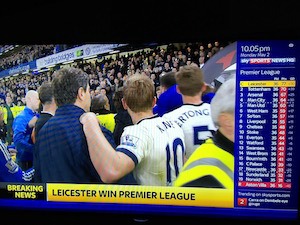 What a difference 132 years makes

What have John Humphreys, Elton John, the last 132 years of Leicester City Football Club and “Ideacide” got in common?

You’ll see that link for yourself as you continue reading. You may need some help with Elton John – unless you remember his outrageous stage costumes!!

They were almost relegated last season, but something happened, and for the first time in their 132 year history, this year – they won !

That ‘something happened’ is a bit of a throw-away comment, when you think of the enormous competition they faced. Week after week.

Goodness me, if that doesn’t inspire us, what will?

I don’t care if you follow football or not! You’ve got to admit, the courage and determination, and willingness to try – and risk failure – it’s nothing short of heroic, and I’d be shouting about them from the rooftops anyway – but the mere fact that I’ve felt an enormous fondness for Leicester since my university days (which I loved) just puts a cherry on the top!

Lovely write up by our Roger Hamilton 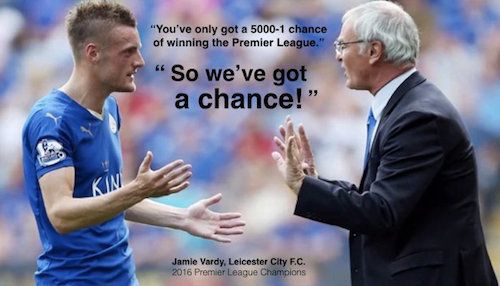 About Jamie Vardy’s amazing story – from underdog to champion.

Ideacide -v- courage. What’s that all about?

An excellent article by Matthew E. May that makes you think. He starts:

“But when we reject, deny, stifle, squelch, strike, silence and otherwise put ideas of our own to death, sometimes even before they’re born, it is the highest crime against creativity. It’s an act of pure tragic mindlessness. It entails the voluntary shutdown of the imagination, the long-effects of which eventually kills off our natural curiosity and creativity.” 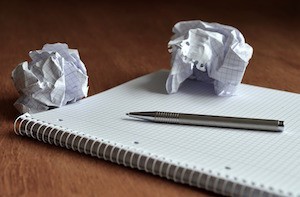 Sometimes we just have to talk kindly but firmly and remind ourselves that none of it is important. The problems start (in my everso humble view) when we start taking ourselves too seriously. Being able to shrug and declare: you win some, you lose some – is very powerful.

My mum and niece has their own expression, for thwarted expectations. Holly used to say, “We don’t care, do we Grandma!”

Transgender issues highlighted by the BBC this week 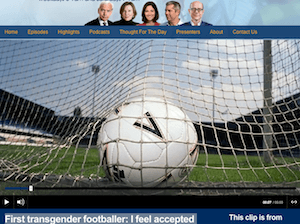 Most of us don’t understand what it must be like to feel trapped in the wrong body. And like Pollyanna, we can be glad about that. The fear of the unknown and of what seems strange and different is revealing itself in some of the more aggressive social media comments – as per usual, but I say, good on the BBC for bringing some of the issues into the mainstream. The more we know and understand, the less scared of it and the more accepting we are.

And that’s surely how it should be?

It wasn’t long ago there was a big hoo-ha about same sex marriage – and while there are many areas of the world where fear and violence is directed to some folk, the issue has pretty much come and gone for many of us. This week I saw a same-sex couple holding hands as they walked through my town. That gives me hope. After all, they were behaving just like the rest of us…

Which is the perfect link to our Elton…

…who was among the first to have a civil partnership, and then a same-sex marriage when the opportunity arose. in Windsor, right under the nose of our monarch! No one died! What’s the big deal? Live and let live.

One day we’ll look back at the last vestiges of public prejudice and wince with embarrassment and shame. 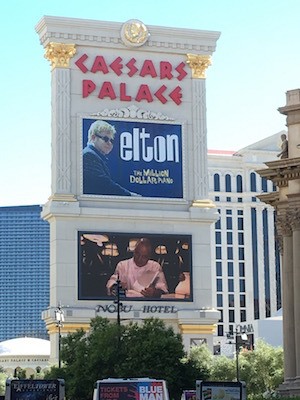 Talking of Windsor. Saw some stonking photographic portraits of her majesty in Windsor, just before her 90th birthday. Unfortunately we were away for her actual event and had to decline her kind invitation, to the family paintballing party…

I don’t feel too badly – I’m sure she was able to make up the numbers so the game could go ahead!

So we saw him (Elton) at Caesar’s Palace instead

And no, Caesar didn’t use to live there!

We were away, catching up with Elton John – who was onstage the whole time, singing and playing every song – for two hours. 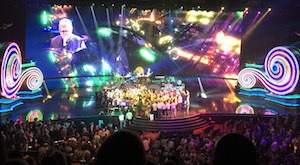 He’s playing at the Henley Festival this year, but the tickets are long gone.

But we don’t care, do we Grandma?

Please leave me a comment or two below, and let me know what you think. Ta everso!