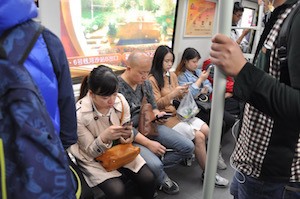 You’d hardly think we’d need instruction on how to talk to strangers, would you?

After all, haven’t we all grown up with the motto, “Don’t talk to strangers?”

And if you think about it, from an evolutionary perspective, it would have been safer to have steered clear of people unknown to your own tribe who might be after your cave, your food, your children…

The most effective way for your unconscious mind (the part of your brain that is there to make sense of the world and keep you safe) to keep you away from perceived danger, is to make you afraid of it.

I did say perceived danger, didn’t I? 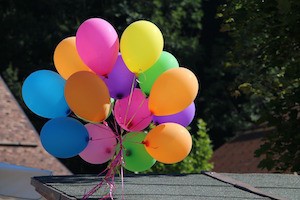 At first glance it may seem that some fears are more useful than others, given that we no longer live in caves, and have to stalk and catch our prey “out there” where danger lurks, without becoming prey ourselves in the process.

Surely this evolutionary mechanism is also behind xenophobia? We might attempt to justify any negative attitude towards other people from a different background: There’s something wrong with them, and we should know, because we’re alright. Obviously!  🙂

We can rationalise all we like, but ultimately what’s going on is fear. Fear of the unknown. Because clearly, we’re not as familiar with the beliefs and values and traditions of people from other backgrounds differet from ours.

My mum tells a charming story from when she was teaching the Reception class at St Nicolas School, Abingdon.  She was doing her, “Don’t talk to strangers” routine, trying to reinforce a point without scaring them to death, when a five-year-old piped up, “But Mrs Robson, I don’t know any strangers!”

Smart kid! No arguing with that!  🙂

And that’s the point of my article: how on earth are we going to get to know the strangers around us, when more and more of us aren’t even glancing up at them from our smartphones?

How are our children learning the necessary social skills to relate to actual people, when their attention is stuck in virtual reality? 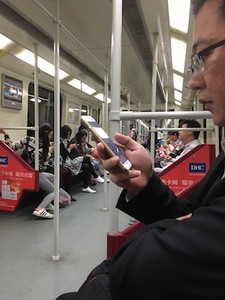 We’ve just got back from Hong Kong and China, where I took these photographs. Look! It’s the same everywhere you go in the world! Addicted to technology!

There is a particular website where I have access to good quality photographs that I can use for my business. If I search for pictures of students, 95% of them are photographs of young people glued to a screen in their hand.

So that’s a student is it?

It’s bad enough that my generation spends so much time paying more attention to our devices than to the company around us. It’s called ‘phubbing’ (snubbing someone by use of a ‘phone!) and we all do it… some more than others. (You know who you are!)

But what about our youngsters who grew up never knowing anything different; never learning how to strike up a conversation with the person next to you? I mean, why would they? They’re already having a conversation through the device in their hand.

Worryingly, according to the medical profession, our youngsters are growing up with a widow’s hunch. They are actually developing hunchback problems (kyphosis, if you want the medical term) because of the amount of time they spend hunched over their ‘phones.

If you think that’s bad for your health, consider the fact that isolating yourself from real people has a whole bunch of knock-on negatives, including, get this, a 67% greater chance of a heart attack!

We are social animals.

Ignore this at our peril! 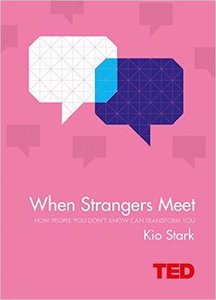 How People You Don’t Know Can Transform You

Most of us grew up being told not to do it!

Here’s a great article about the negative effect on our health of not talking to strangers and the beneficial impact of doing so. It’s a bit of an eye-opener!

Learning is fun! Or is it?